As a transformational merger between two office furniture giants heads for final approval, the details of their seven-month courtship offer insight into a deal that could change the industry’s landscape.

Zeeland-based Herman Miller Inc. in April shocked the industry when it announced it would purchase long-time competitor Knoll Inc. in a $1.8 billion cash-and-stock deal.

The pending deal, which is up for shareholder votes at both companies on July 13, was the result of back-and-forth proposals that began in December 2020 and nearly fell apart because of eleventh-hour renegotiations just four days before news of the merger became public. 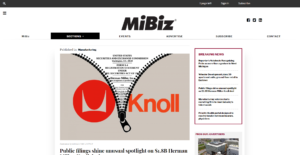 Steelcase recognized as 2021 honoree of The Civic 50